It was our last day in Edinburgh. December 27th.  It was time for a traditional Christmas Falafel.

And it wouldn’t be one of them ‘£3 plus chips’ malarky neither. We at Rate My Falafel, had gone upmarket. We had gone to…. a restaurant.

But why were we going to a restaurant, in Edinburgh of all places? Why would we leave the relative warmth of southern England to travel for hours – 13 hours the way there, 15 on the way back, in a cramped, smelly Mega Bus, to go to a place even colder?  Why didn’t we zoom off to some warmer climes for the holiday, in a normal manner like normal people? Or get a different form of transport? Why did we make the journey hours longer by going from Bristol to Edinburgh via London rather than Birmingham?

Well partly because we like to punish ourselves, partly cos We Love MegaBus almost as much as We Love Falafel, and partly because that’s where our friends parents had recently moved to.

We had had a pleasant trip by the time we reached Hanam’s Restaurant.

We had spent an entire day without leaving the house, making the most of a holiday away, and had watched no less than 5 films in a row. All of them were brilliant in their own ways, but my favourite had got to be A Royal Christmas.  It happened to be one that both of my friends fell asleep to. For me it had simply kept me thinking about the hidden meanings for ages, un-sleeping, I considered the lives of the unhappy prince and his conniving mother, who hated the New York lass he had fallen in love with…

We had also climbed up to King Arthur’s seat. This was brilliant, not least because we had recently become obsessed with a board game called ‘Avalon’ which was set in King Arthur’s Kingdom. No one was allowed to come into our house in Bristol without being forced to play it, in fact. Or reveal when they had last had a bowel movement, but that was beside the point. I was pretty scared that the mission to climb the mountain would fail…dunno why.. 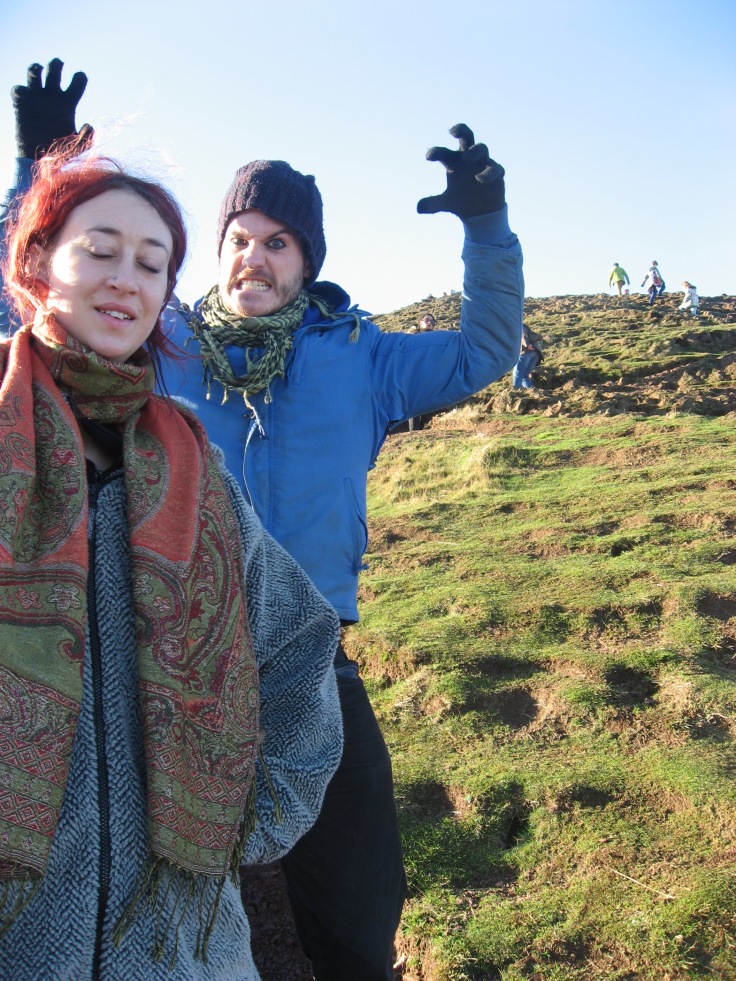 We’d also enjoyed a local pub or 4. We had the luxury of Irn Bru on tap in one, had the opportunity to drink a beer on a moving carousel in Winter Wonderland AKA Living Hell, got to watch the crashing and furious waves beat against the walls of one pub in the neighbourhood of Trinity, and watched a million screens in another, all showing a smug man playing darts (apparently very well).

Which brings us to Hanam’s.

Hanam’s is a Kurdish and Middle Eastern Restaurant situated just off the Royal Mile. For those of you who don’t know Edinburgh, that’s just off the big touristy bit in the centre, near George 4th Bridge.  My first impressions as we walked in from the bitter cold, was that the plush red themed place was full of happy looking people. ‘A good sign’ I thought to myself as I looked in surprise at the array of items on the menu. I wasn’t used to much more than a falafel wrap or choice of disgusting looking kebab. Hanam’s had everything! Cutlery and all! Napkins! Or Serviettes?

Naturally I went for the Falafel and a glass of Diet Coke, while the rest of my friends and our generous host, Jill, the lovely mother of our dear friend Q, were a bit more adventurous. Not everyone has a falafel blog to write about, I suppose. As we waited for our food, I examined the restaurant more closely. The walls seems to be covered in pictures of women holding various different containers. Water bottles, tea pots, cups. Soft music was playing and we exchanged some witty banter with the waiter “everyone has his own craziness, in very culture.” He smiled knowingly, referring to the coffee.

The starters arrived. I could have double falafelled, but I left it to R to try it as a stand alone dish.

The Falafel was crispy on the outside. I mean to say it had quite a firm layer of crisp. Once you got past this layer, the inside was revealed to be softer, and the hummus it came with made the experience less dry, a problem the falafel eater will typically recognise.

On asked to describe the Falafel in 3 words, R said “Tangy, Rich, Good”. Q said “like a flavoursome armadillo”. My notes also include the phrase ‘not over garliced’ I am not quite sure what that means.

The main course arrived. I was impatient to try out their falafel wrap. In a place like this, it would probably be the best one ever.

The bread was thin and pleasant, and the salad fairly varied with a nice dressing.It was certainly very filling too, and well wrapped to prevent embarrassing spillages. However, to be perfectly honest, I was a little disappointed. The wow factor wasn’t there. There was no hummus, no chili sauce, nothing to make it particularly stand out and I felt the falafel itself was a little dry. So despite the excellent service and the lovey place, I would advise choosing something else on their extensive menu, as by all accounts their other meals we simply delicious.

Level of Intoxication- 0/5  (could have made an impact, to be fair)

So there you go, stick to the greasy kebab shops for your falafel fix.