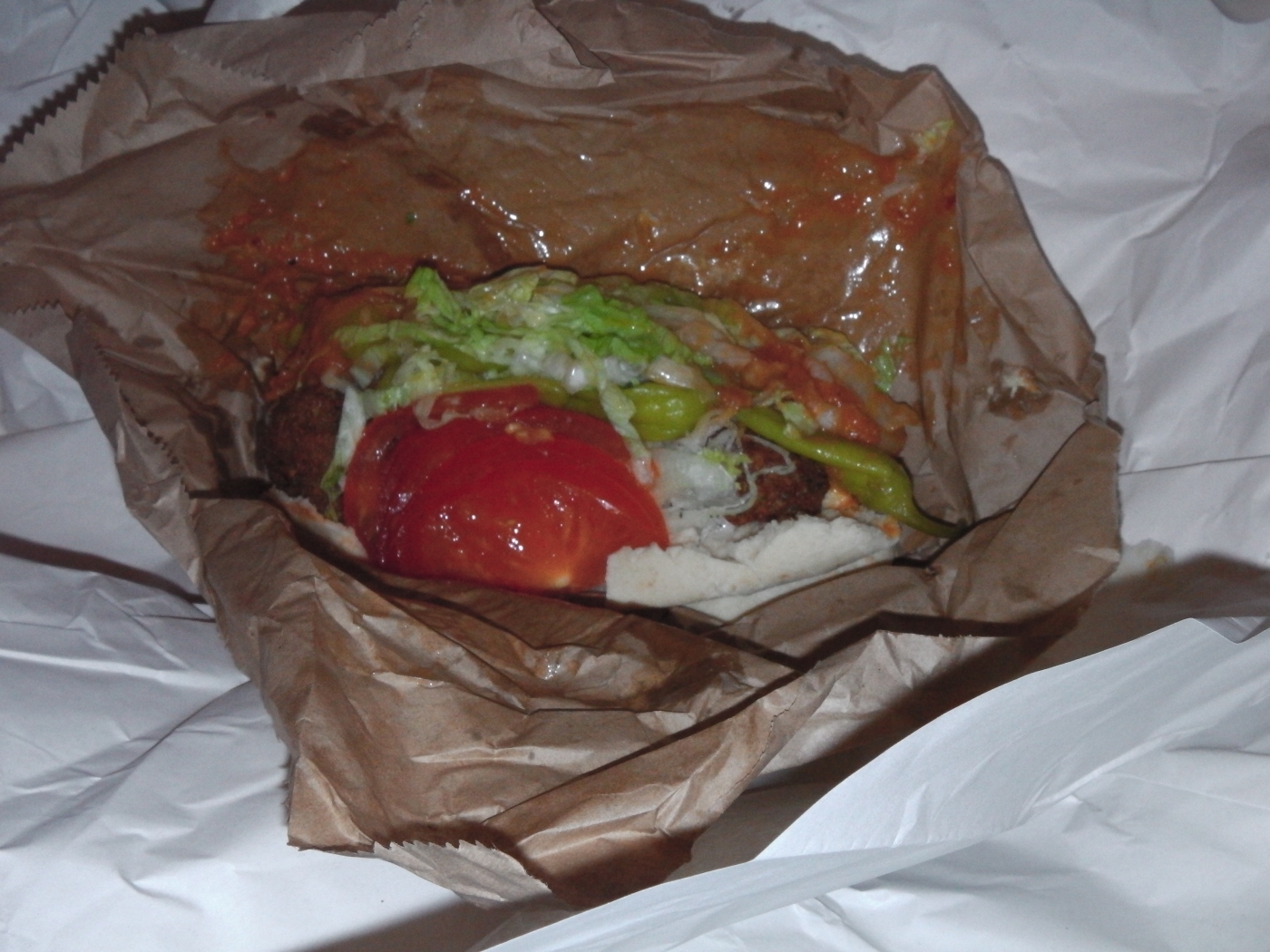 On Sunday night (7th) I found myself tucking into a falafel, on a plate, with a knife and fork. I was like David Cameron and his famous hot dog (just writing that makes me think of his other pork based activities, ugh). No, no, the reason was much more reasonable that that- the falafel (or falafol as the sign pronounced) was so badly wrapped that I couldn’t even pick it up. 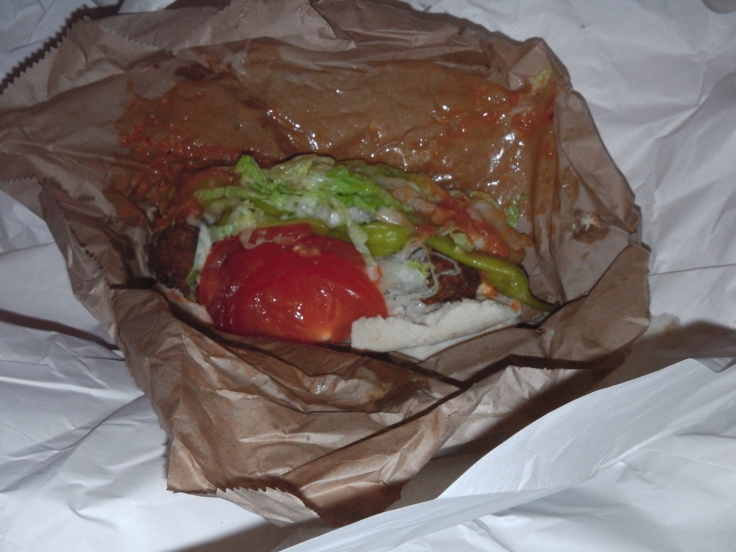 It came as a mangled mess inside the wrapping, which itself was beautifully decorated with what I think was arabic writing. But what did it say? 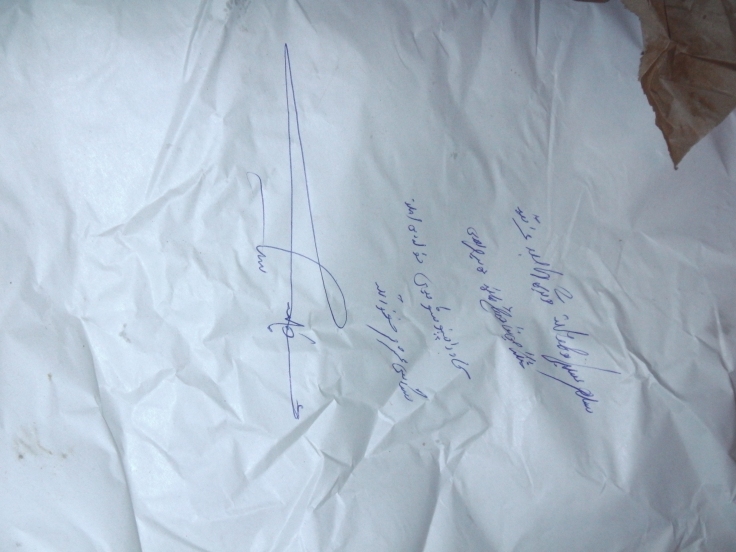 Let me set the scene. I was feeling terrible, truth be told. I had crawled home from Mr Robert Thomas Hummus Ireland’s David Bowie themed birthday party at 6 in the morning, battered in many ways but especially by the cruel and unrelenting rain pissy winds. I woke up feeling typically shit. I flaked on all my promises for the day and lay about complaining and regretting my life choices, pausing only to make some biscuits which turned out a bit funny. By the time that evening came, I had recovered enough to need a falafel.

We went to the second closest place- the other one I had already reviewed – see post ‘Broken Window Pain’. 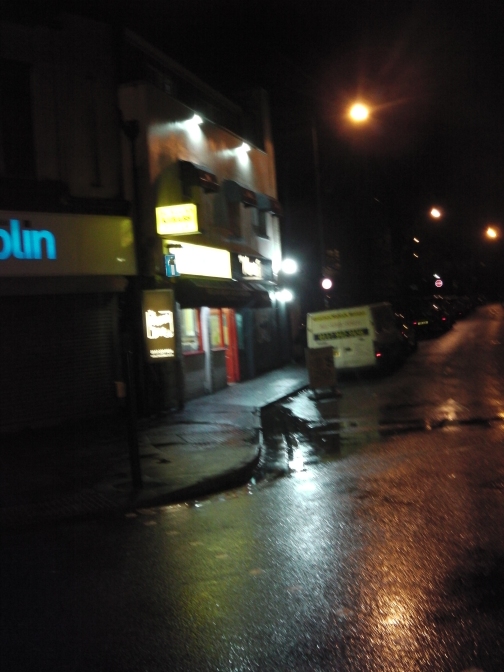 This one I had been saving for a while. Named The Grecian “Our aim is for you to enjoy our cuisine and smile” we at Rate My Falafel had heard reports that the staff were incredibly sexist. A good basis for a review, thought I. I sneaked my camera in so I could record any potentially sexist comments or leary glances but unfortunately in my weakened state I dropped it on the floor and the battery and fell out, making a loud crashing noise.

The man who had taken my order had a strange grin on his face and was menacingly sharpening his knife in front of the wood fire grill- swoosh, swoosh, swoosh. The staff- all men, of course- were wearing matching purple t – shirts and one had a ridiculous yellow square hat- the moodier one of the lot. Whilst we were waiting we witnessed the hard bartering tactics of this man- he managed to persuade an affable chap that he wanted 2 pizzas instead of only 1 The man left bemused, laden with 2 bags of chips, 2 pizzas and a worried expression. The falafol, reasonably priced at £2 but came to an alarming £3.60 when including hummus, came with the option of an array of saggy looking salad. I chose onion, tomato, jalapenos and lettuce- I could have also had coleslaw, cucumber and red cabbage.

Disappointingly, no lewd comments were made and they seemed pleasant, if slightly sullen. Perhaps the additional comment of ‘thanks darlin” could have been a little unnecessary, but on the whole, nothing to write home about it. Maybe the scrawled arabic writing was a sexist poem or something? I guess I’ll never know.

So I was eating it with a knife and fork. This was certainly not a good sign- that’s minus points straight away. The falafel itself was really rather flavoursome however, with a some of indian onion baji type reminiscence, with perhaps some onion in the flavouring. The hummus was nice but made the bread soggy, perhaps the cause of the need for knife and fork. Or maybe the chili sauce was too liberal. Or maybe the guy just couldn’t be arsed to wrap my falafel properly. Whatever the reason, I was bitterly disappointed.

Value for money -£2 without the hummus, can’t really complain there, but if you’re on the go and need a falafel, this is not for you. It is impossible to eat and really rather messy.

UPDATE: a second falafel from the Grecian was bought by a RateMyFalafel reviewer. It was equally as shit.