That’s right, we couldn’t resist the pull of mighty olde England and we returned once more to the glorious homeland. I wanted to see Brexit in all its fanfare – putting the Great back into Great Britain. So, we drove for 3 days across land and sea, and arrived back in the old country – to witness history in the making. Also, I really wanted a crumpet and a decent curry. And a falafel, obviously. One of the first things I noticed in the first few days of being back was the sudden proliferation of vegan food absolutely everywhere. I mean, Bristol was pretty darn vegan friendly when I left just 5 months before, but now you couldn’t go anywhere without massive signs announcing vegan menus, the supermarkets had entire freezers full of vegan ice-cream, Greggs vegan sausage rolls were on sale everywhere (well, in Greggs). It was brilliant, especially as I had recently developed a dislike of cooking for myself. It was perfect timing. The prices just need to be quartered and I’d be laughing, (and rolling around, obese). It felt a bit like cheating really, though. It used to be a challenge to be vegan, you could feel smug, knowing you were better than everyone else and their insatiable appetites. Now, it was too easy to eat total crap, junk food galore, that happens to be vegan.

I digress somewhat. We were staying at a friends house which was just off Stokes Croft, and I knew for a fact it was just a stones throw away from Biblos, who do pretty good (if hipster-expensive) falafel wraps. I had been obsessing about getting one for the entire journey from Italy to Bristol and I couldn’t wait to get my hands on one. If you get there before 6pm you can have a medium wrap for £4.50 otherwise it is a whopping £6 for a wrap – which is frankly ridiculous. I arrived at 17.58, just in the nick of time and ordered a falafel wrap with mixed veg. I anxiously waited for it to arrive, reading the Bristol Cable as I did so – an excellent local, cooperatively run investigative journalism type newspaper- lacks in falafel reviews and horoscopes. I had quite a while to kill before meeting a friend in town so I could take my time over the falafel, savouring the flavours and analysing the composition scientifically. I was starving though, and greedy, so I demolished the thing just as quickly as normal.

With less grace than normal in fact, as it was far too full and completely fell apart. I thought I was just being gross, but then I noticed others were having similar struggles and had requested cutlery to eat the rest of theirs. A wise idea, that I wish I had thought of. Instead I ended up with sauce all over my hands. It was good, but not as good as ones I had there before. The veg was different and was too cabbage heavy this time, whereas before it had mainly been roasted veg like sweet potato. It was still a hundred times better than anything I had sampled in Italy, however.

A few days later my friend told me about Eat A Pitta. I mean, I knew all about Eat a Pitta obviously, I am not an amateur, but she said there was a deal that you could buy a salad, 3 falafel and hummus for only £2.20, and then 50p for an extra salad if you wanted. I had received many free Eat a Pitta Falafels in my time, whenever I passed by, so I felt it was time to actually buy one. I know people who swear by Eat a Pitta, but I had always been put off by the big queues and the chain nature of them. However, it was time to open my mind and I happened to be in Clifton, failing yet another interview to work for Bristol University. I consoled myself with a falafel salad at the Clifton Eat a Pitta branch. After a brief confusion about paying one person then having to produce the receipt a minute later to someone else, I managed to get my order. I went for 2 salads – a tabbouleh and a mixed greek style salad with cucumber, onion and tomato.

The falafel itself was really tasty – green on the inside and moist, crispy on the outside. I had thought in the past that their falafel was a little too dry, but they seemed to have perfected the recipe now. The hummus was ample, but non- descript, and the salad was fresh and pleasant. I felt pleased with myself for having gone for a slightly healthier lunch than usual, but I vowed to try the pitta as the name suggested later as well. 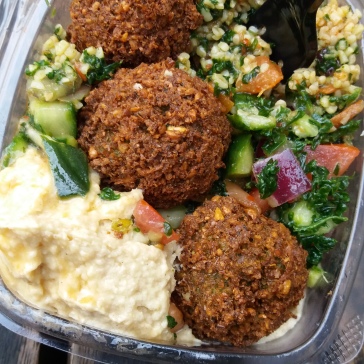 UPDATE: Another friend has now informed me that Eat a Pitta have now started offered a zaatar flat bread for an additional 50p that is ‘very nice indeed’.

Plus points for hummus

Plus points for hummus.

All in all, both were good but lacked the wow factor. Stay tuned for more Bristol Falafel!