So. We moved to Italy. We were travelling around Italy for our honeymoon, seeing all sorts of beautiful things and it seemed like as good as any place to rest our heads. We were a bit tired of moving around all the time and having to re-pack the f**king car every 5 minutes. So, Nettuno it was. A lovely sea side town not too far from Rome. The apartment we rented (3 bedrooms, 2 bathrooms, sea view) was cheaper than what we were paying in Bristol for literally a shoe box, and my partner was able to find a job teaching English in a nearby town of Latina almost instantly. Everything was going swimmingly, and in fact I was swimming in the sea most days.

Then. Winter hit. It was suddenly too cold to swim in the sea. And I couldn’t help but notice all the fascist graffiti. It hadn’t been at all obvious with our rose-tinted glasses on when we first moved in, but more and more swastikas and ‘fasci’ symbols appeared as if from nowhere, not so much in Nettuno but in all the neighbouring towns. I took it as a personal mission to ‘correct’ as many as possible with my trusty spray paint and paint pens, that I took to keeping on me at all times. The bizarre thing was that some of it was written in English – ‘support your local fascist crew’ – when Italian fascism is based on ‘Italy for Italians’ – why reach out in English?

Latina, where my partner worked, turned out to be a man-made town built upon drained swamp land, designed by none other than Mussolini himself. In fact, the inhabitants didn’t seem to have a bad word to say about the mass murderer. But we didn’t know this at first.

Hungry, we were in Latina having gone into the nearby mountains for a day with our good friend QUAID who was visiting. Where could we grab a bite to eat? Naturally most places were shut as we were once again not hungry in the designated dining periods, but we managed to find somewhere with lights on and piled into the café. We sat down and waited for the waiter to come to us. Looking around, suddenly I realised that there was a familiar bald looking man staring at us from a bottle of wine on a neighbouring table. It couldn’t be?  I nudged the others. Taking a furtive glance at the walls of this otherwise sparsely decorated café, I realised they were covered in pictures of il Duce himself. There were about 20 photos of Mussolini. Horrified, we scuttled out, taking refuge in a kebab place. Kebab places can’t be fascist, we reasoned. Anyway, I was sick of ‘pizza rossa’ and marinara by this stage and welcomed the idea of a hearty falafel wrap. How had we ended up living in an overwhelmingly fascist area? Apparently, the region where we live, Lazio, is well known to be full of fascists. It would be funny, 2 anti-fascist activists accidently living in the heart of nationalist Italy, if it wasn’t so bloody depressing.

As previously mentioned, falafels in Italy thus far are pretty hit and miss. So, I wasn’t holding out for anything particularly special with this dining experience. I was just happy that the walls were covered in random pictures from all over the world rather than a stern-faced dictator. No Erdogan in sight either (it was a Turkish kebab place). Once again, the falafel had the option of coming with chips inside the wrap, which pleased me and were able to choose from a variety of sauces and salad.

The falafel was fried and had a satisfying green colour when bitten into. It was well wrapped, and was massive. The chili sauce was actually fairly spicy, and the staff were very friendly. Another positive was that it was actually open for business, you were able to order and enjoy food at the disgusting time of 6.30pm. I know, madness. However, all in all, it did lack something. It was OK, but it didn’t have quite what I was looking for. Not a bad falafel, but nothing special. It was also quite expensive – 6 euros for falafel, chips and a drink. 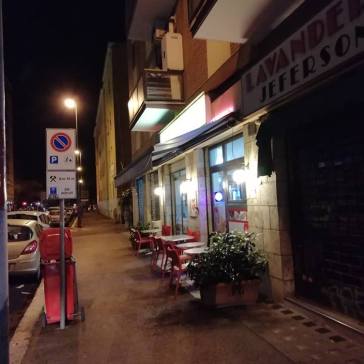 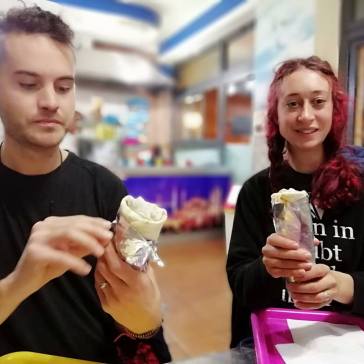 [UPDATE] On a second visit, my husband was given a discount for wearing his Kurdish scarf, by another woman working there who was Kurdish herself. Win.