That’s right! I done and got hitched. And it wouldn’t be a honeymoon without a falafel (or 4). We set off from the UK after a week of farewells that took us all over the country. We were off, on a road trip to Italy. 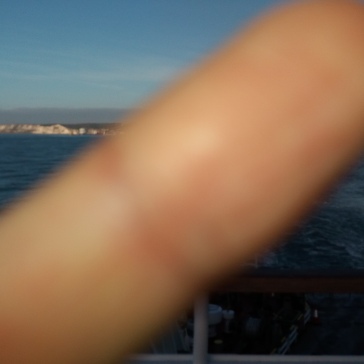 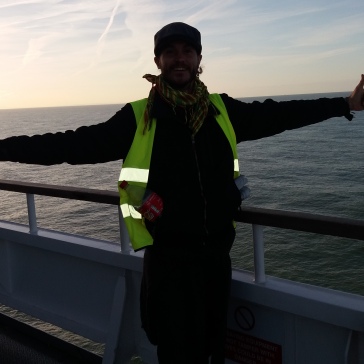 We decided to take a detour and pay a visit to a friend who lived in the Netherlands so after a rushed baguette in France we crossed into Belgium and then into the Netherlands. Leiden, where our friend lived, happened to be celebrating some sort of independence day or something so the whole town was full of drunk people and flashing fairground lights and shit, pumping music. It helped with the homesickness. We popped into a coffee shop for..a coffee..and then got out of the busy centre as quickly as possible. And went for a falafel. It only seemed right to start the holiday as we meant to go on, that is, ignoring local delicacies and going straight for the Turkish kebab shop. To be fair, we asked our friend what food Holland was known for, he said chips, so we got some of them as well. 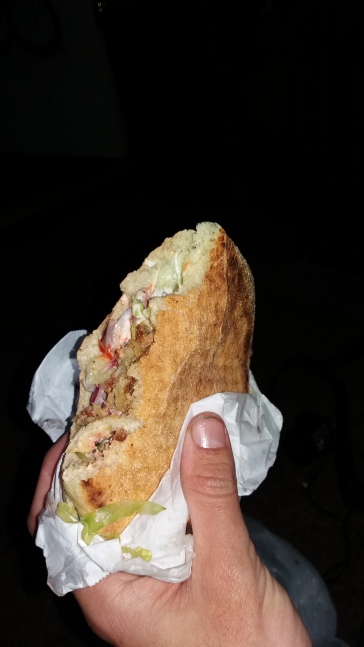 As I recall, the falafel was typically shit. It took a long time to make, yet it fell apart almost instantly, a poorly wrapped excuse for a falafel. It was far too onion-y and the texture was too crumbly – none of the crisp freshness that we look for in a decent falafel. The salad was average (apart from the excess onion) and the bread was OK. I’d had a few lagers, which usually improves the taste, but this falafel did nothing but leave me cold. The chips were alright.

Not one to linger on my misfortunes, we carried on our trip, heading to Germany where we spent the night in Cologne – nice Cathedral, tasty Thai Meal and then followed the river Rhine down to the black forest, camping along the river for a few days. 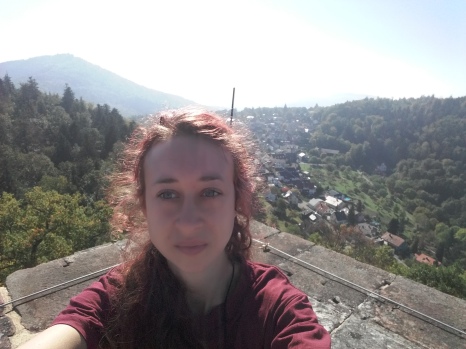 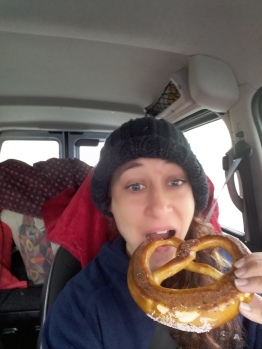 The black forest was lovely- we did some nice hikes and saw some ruined castles, and then went to Baden-Baden for an afternoon. I had read somewhere that it was a nice place to go to. It was nice, but in that posh Bath or Exeter sort of way – we couldn’t afford to actually do anything or buy anything there. We searched for somewhere to eat and found ourselves drawn to ‘Istanbul Kebap’ – the only reasonably priced establishment in the spa town. Naturally we ordered the falafel wrap and chips and sat down to await our meal. 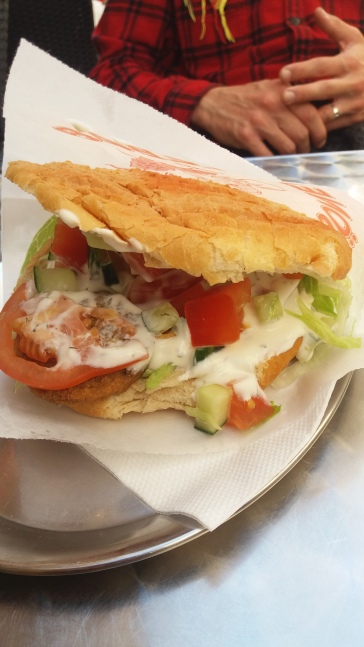 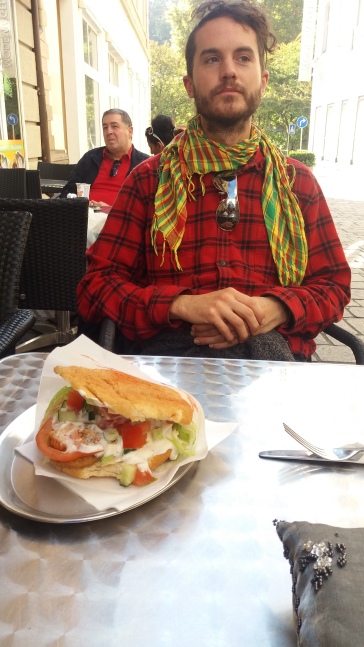 The falafel came in a burger bun. Covered in what I think was a disgusting yoghurt based sauce. It could not have looked any less like it did in the photo! I was furious. The salad wasn’t too bad, at least it came with a jalapeno. The falafel itself had at least been fried. That was the extent of the positives of this falafel. There was no hummus. No tahini. No olives. At some point a swarm of over excited school children came over. It was almost too much to bear. I left, depressed. I had thought that falafel in Germany was great- I’d had some lovely ones in Berlin after all. I started to think that it was sign. Maybe poor falafels would over shadow the whole honeymoon?

It was perhaps for this reason, that I didn’t eat another falafel for over a month. 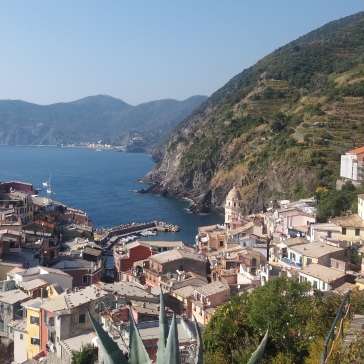 A month. Yes. It could have been something to do with the fact that as soon as we crossed the majestic alps into Italy from Austria, that the food just got so much better. Let’s face it, Italian food is some of the best in the world. And with vegan options pretty much everywhere, I wasn’t stuck for choice. The memory of the falafel started to fade, as we visited mountains, lakes, beaches, ancient ruins, museums and cities.

One month later. Rome. I was hungry. I had time to kill. I remembered I had seen a sign advertising all sorts of foods – curry, chicken, falafel, a full English breakfast, and of course pizza (I think there might be a rule that all takeaways have to provide pizza). I was intrigued. I made my way to the restaurant, which was conveniently located right in front the of the main central station. I sat myself down and was handed a menu, but I knew what I wanted. I ordered a falafel wrap ‘meal’ (which turns out meant it came with a can of coke) for the princely sum of 5 euros. The price was high, and so were my hopes.

While I eagerly waited for my meal, I was persistently harassed by men trying to sell me phone chargers. Do I look like someone who particularly needs a power bank? Nonetheless, I keep my eyes steely and determined and patiently waited for the food. When it came, I was bitterly disappointed.

The thin wrap was so tightly wrapped it was difficult to even take a bite at all. Even though the waiter had confirmed 3 times that I wanted chili, in my professional opinion this falafel had never been anywhere near a chili. The ‘falafel’ may not have even included chickpeas, such was this unrecognisable mush that sat before me, weirdly not even made into separate chunks but just one long sausage. Italy is a country literally full to the brim with olives, but the salad was simply some limp lettuce and some sad tomatoes, not even any cucumber to add any crunch. Despite the poor quality, rest assured that I ate every single bite.

Just a few melancholy hours later however, our luck started to change. I met up with my husband in a different part of town, on our way to a gig at a squatted fort – it has a moat and drawbridge and everything! He was hungry, and after searching around for a takeaway that wasn’t pizza, we found ourselves in a chicken/falafel shop just 5 minutes away from the squat. Much more reasonably prices at 3 euros 50, the falafel came with chips and a drink. This looked a lot more promising. I could still taste the falafel from earlier, but I forced myself to sample the falafel when it came (a falafel reviewers work is never done). It actually tasted alright! It had chips squeezed into the wrap itself and there was a choice of various sauces, including chili. The falafel was fried fresh, it was green in the middle and it had a subtle flavour. The wrap and salad weren’t anything special, but it definitely passed the falafel test of being edible whilst sober, an apparently more and more difficult task.

Stay tuned for more Italian falafels, after the holidays.