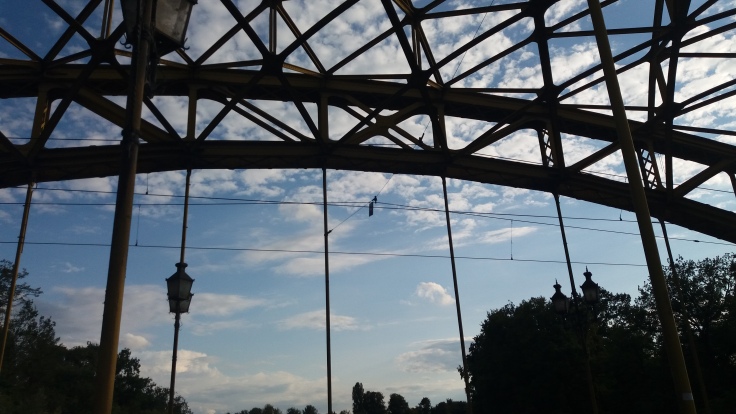 I had been in Wroclaw (vrotslarv??) for 3 days, still completely unable to pronounce any words, remember how to say thank you, or work out the price of anything. I had been thinking about McFalafel all day, ever since I had spied it in on a quick run in between talks. Perhaps I should explain. I wasn’t in Wroclaw on holiday, oh no, I was a very important and grown up person attending a week long international library conference (IFLA). I was also, stupidly, trying to train for a half marathon that I had foolishly signed up to in the spur of the moment the previous week, giving me just over 4 weeks to train. This, combined with the confusion of travelling, the Eurovision song contest style welcoming session, the copious amounts of free champagne (I had 5 glasses in 2 hours) and a complete lack of vegan food at the conference did not lead to a promising result on my run day and definitely not in Wroclaw. I had also managed to somehow confuse myself so much that all my various devices said completely different times on the screens that I accidentally missed the session for ‘newcomers’ as I had gone with a time 2 hours back instead of one hour ahead. I had managed to get lost 5 times on my first day and at least once on all the subsequent days, and I spent the conference considering throwing my devices in the many rivers that run through and around Wroclaw. It really is very pretty, and totally FLAT, unlike this godforsaken country. I had been to a particularly boring talk about Hungarian archiving, which was making me hungary, and I found my thoughts drifting to how polish falafel would compare to other attempts by European countries. Berlin had excellent falafel, and we were not too far away so my hopes were fairly high. I could have stayed to ‘network’ after the talks, but I know who I am and where I come from.

It took me a while to find it again, I felt like I had been walking down the same street for hours until I finally strode into the brightly lit interior. (When I checked my google fit, it had actually been 7 minutes, I swear that thing isn’t right). There were 3 types of falafel to choose from ‘Zestaw Falafel’- no idea, ‘Pita Falafel’, and ‘Falafel’. Thank the lord ‘Falafel’ seems to be the same in all languages. I tried to remember the word for hello but reverted quickly to the tried and tested British way of ordering food in other countries – louder. FALAFEL? I shouted, gesturing to the board. The slightly bored server (there was a man and woman, which pleased me, normally falafel takeaways have a labour force of men) asked me in perfect English what type I would like and I gormlessly stared at him until he explained the options. I went for the standard wrap.

I pondered on my experience so far as I awaited my food. It was interesting being in a country where I had absolutely no idea what anyone was saying, any of the time. Most times I visit somewhere I have a vague sense of what is going on, I can understand the tone of voice, read a few signs. Here, nothing. I did have an entire conversation with a Polish lady who was giving me directions to my hotel/apartment – she spoke in Polish and I spoke in English, but we seemed to get along OK. Trying to pretend to be a real person all week was also very tiring- I felt completely exhausted at all times. How must the people with English as a second or third language feel listening to all these talks (the conference was in English, naturally) in English? It hurt my brain just listening, and having one conversation in Spanish, with my only friend.

When my wrap arrived I was wary. There was far too much sauce, I thought “this will not be pretty”. However, the wrap managed to keep its form in a way that in fact the tahini sauce did not drip too much at all. The falafel had an almost floral taste to it, with hints of parsley and a generous amount of hummus. I was also very happy to note gherkins in the salad as this ticked off the ‘polish food’ eating part of my agenda. Actually, I had had a freezing cold gherkin for breakfast the previous day as well, I think I accidentally put it in the freezer section. It was disgusting.

Below is an example of some of the fish soup they tried to give me at the conference.

I packed up the other half of the wrap for later with my every present tuppaware as it was very big and as I left I was pleased that the staff didn’t laugh at my attempt to say thank you – jenko ya?

I also went to another vegan restaurant (Ahimsa?) on my last day. I had a singular falafel for a starter. It was a bit dry. They also had 2 pieces of vegan cheesecake on display but apparently they had ‘been reserved’. I left furious.

If any one wants to sponsor my half marathon, it is for Libraries Without Borders who do loads of great work all over the world to get people access to library material and technology. https://gogetfunding.com/im-running-the-bristol-half-marathon-for-libraries-without-borders/