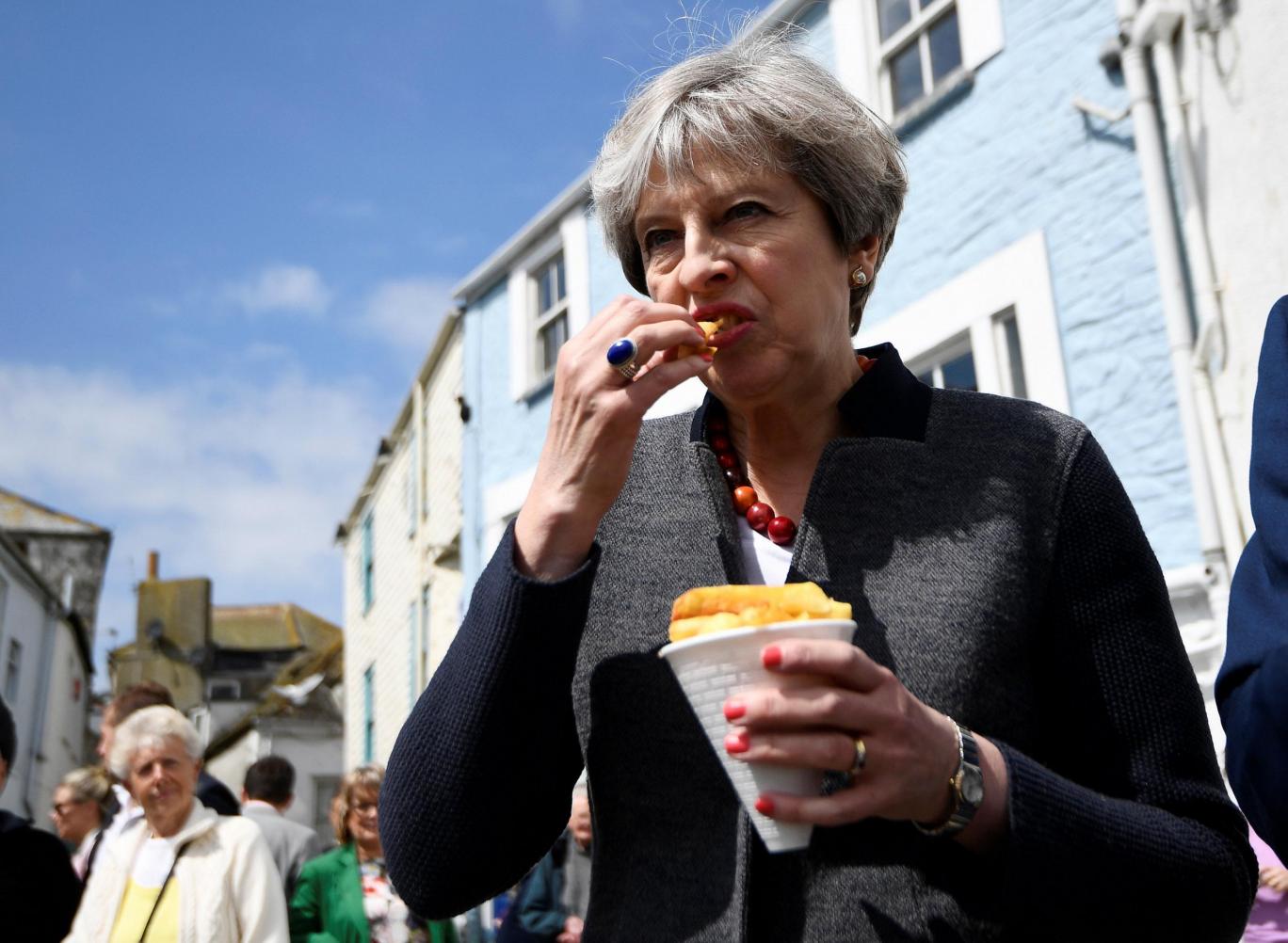 It had been a weird day and it was only 3pm. I had woken up early to get some work done on the millions of essays I had to give in (6 actually) but got instantly distracted by checking our Twitter. I was disappointed to see that our high of 65 followers had dwindled to 59 – what did we do??? Just as I was about to log off and begin work in earnest, I found out that none other than Theresa May, our gracious (and fashionable) ruler, was to come to Bristol for a ‘rally’. Maybe Twitter does have a purpose after all! Well, the next few hours were spent trying to find out where exactly she would be, but it was really well hidden. I gave up, faffed around, then got ready to give away my blood. 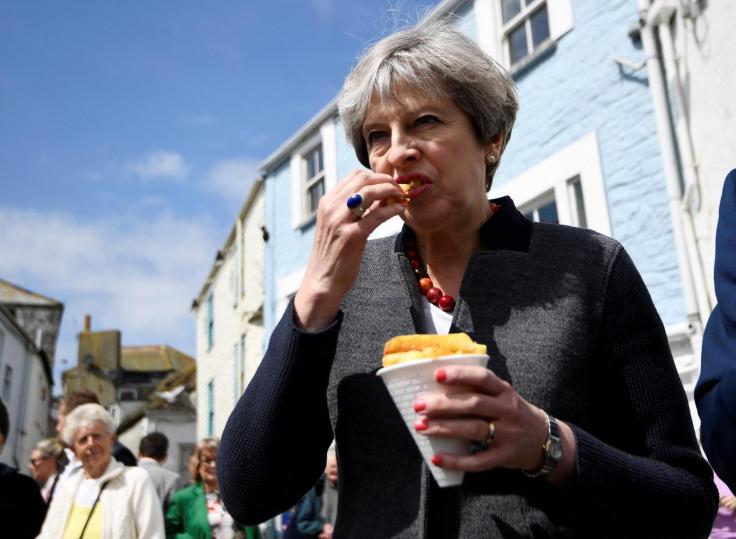 Not in a weird ritual for May Day or anything, just the local blood drive thing had come to town and I had made an appointment years (felt like) before to donate some of my lovely healthy falafel fuelled blood. After waiting for AGES, they took a little sample to check my iron levels (I failed that particular test last time I tried) and this time I made it! My iron levels are fine. Take that, vegan critics! And I take no supplements, just in case you were wondering. Ha.

Anyway, to cut the monologue short, I waited for hours more (felt like) and eventually got sat in the chair. But to my horror, 3 professionals failed to find a decent vein! One of my arms has like, no veins apparently and the other one was ‘far too small’. The nurse said ‘normally we suggest you try again in a few years but, in your case, there’s really no point.’ I felt dejected, and as usual, hungry.

Falafel beckoned to me. It was 3pm. I needed to do some uni work really (an MSc don’t write itself) so I headed off to a cafe I knew on Corn Street, checking in the windows of all the posher hotels on the way just in case Theresa May was hiding in one of them, but no cigar. All I wanted was to wish her well, pay my respects, see what she was wearing…alas. 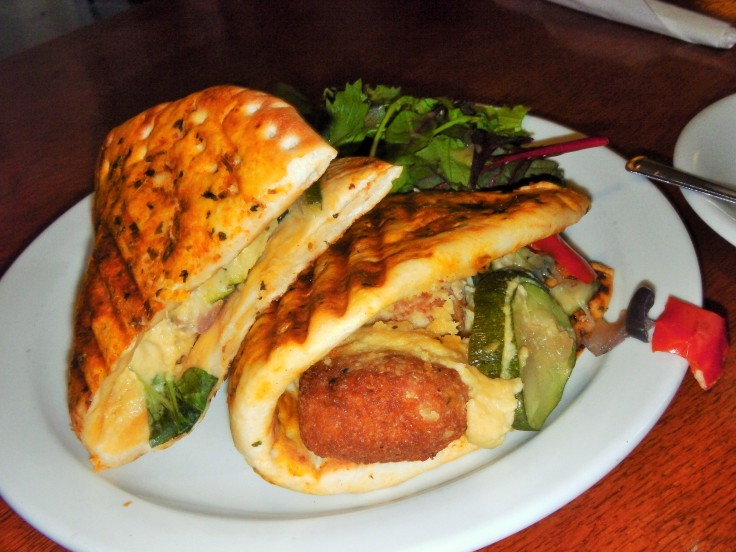 The good thing about Cafe Revival is that it has what is known as a ‘snug’. This is a little alcove at the top with sofas and stuff. Hardly anyone goes in there, this time the only other person was a furious looking woman eating some sort of nut. When my falafel came I thought it looked presentable, with a little side salad and mustardy dressing. The bread was impressive, toasted pitta but with some sort of herbs and tomato in it, a nice change from your typical standard falafel bread. I was alarmed when biting in to find courgettes in it. Then I remembered that it was a falafel with roasted vegetables, which made much more sense. The hummus was plentiful and the roasted vegetables very nice with aubergines and peppers, but the falafel itself was bland. It was even bland in colour – had they forgotten the parsley or coriander? It was like, pale beige. The texture was soft and lacked the crispiness we prefer. It was also quite dry despite the hummus, and the author suggests some chilli sauce could have improved this falafel.

I got a bit bored of eating it half way through to be quite honest but valiantly struggled on to the end. On the whole though, it was big and it filled a hole, and considering I was planning to stay there for hours to do my essay a £4.75 price wasn’t that bad. However, I didn’t stay there, growing distracted by the spelling mistakes in the snug – its book swap not swop! Was it intentional? A joke? If so, I don’t get it. 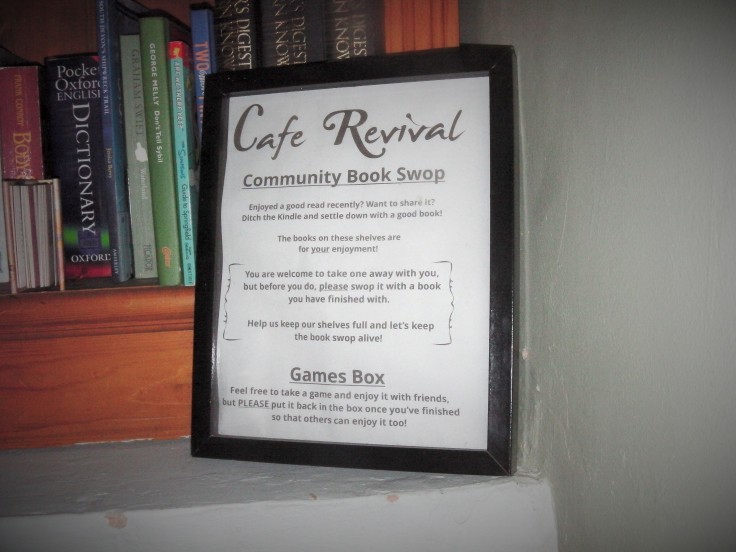 On returning from town, I found out where Theresa May had holed up for the afternoon, but it was far too late. Damn my smartphone-less life. Next time, T. Or should I say Mummy?