But I’d only had one beer. And it wasn’t. Let me set the scene. I had made the unusual move of going out (and on a Wednesday, no less). The Canteen, on trendy Stokes Croft where we found ourselves, was teeming with drunken youths, some of whom (well, one) asked for our advice on places to go out because we looked ‘cool’. Riding high on that smug feeling, we stayed at least an hour before yawning our way home. Remembering in fury that our cooker is STILL bloody broken, we popped in to Big Bite, a Stokes Croft take away that I usually use for their iconic free cash point. I strode in and ordered a falafel wrap. While waiting for our food to be prepared, we hung about outside with the youths who were littering the porch way, strumming guitar and wailing to the Beatles classic ‘Because’, and swigging glasses of red wine. Opposite, we could see the Telepathic Heights ex-squat, scene of the 2011 riots – the hated Tesco Express lay just a few doors down. Settling onto the cold floor we sang along, the smell of weed wafting in the March air.

After a while I grew bored and wandered inside, to observe the making of the falafel. I was distracted slightly by seeing a man wrapping up his bloody hand in a bandage in the kitchen out the back. Pushing this out of my mind, I focussed on the falafel. “Which sauce would you like?” questioned the friendly staff member. “Chili please. And hummus, of course” I laughed. “I will have to charge you extra for THAT” he shook his head. I made a very slight protest at which point they agreed to give it to me for no extra cost- they really didn’t put up much of a fight. After choosing from a disappointing array of salad (no olives, for example) they handed me a large wrap, comparable to some sort of baton. 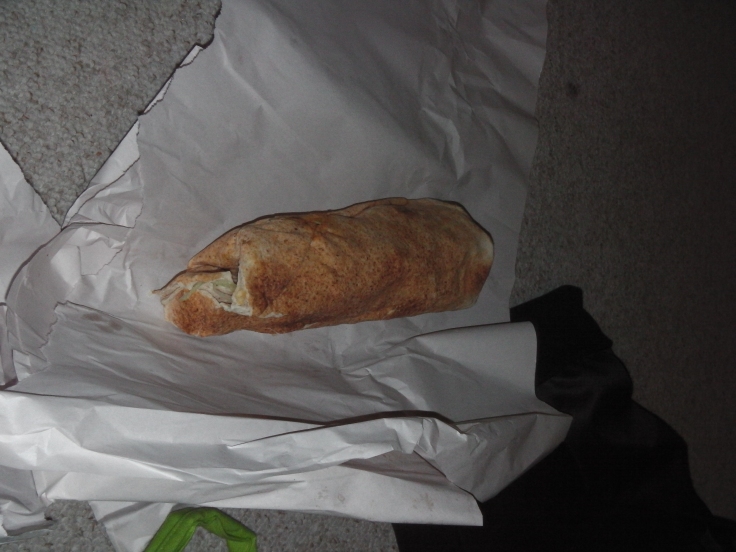 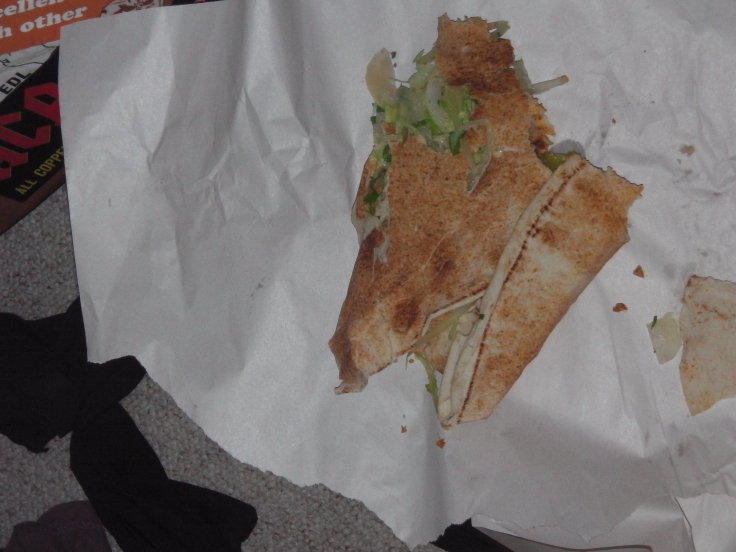 Plus points-friendly staff, good location, large wrap, free hummus (though it really should be free anyway) Other comments include “salty- in a good way” and “tasty falafel”. This, unfortunately, is where the positives end. The bread was standard, wrapped haphazardly. The onion was overpowering, but despite having both chili sauce AND hummus, the falafel wrap remained ACHINGLY dry. Half way through what felt like a bit of a slog towards the end, the wrap totally fell apart.

UPDATE!!! Since writing this post, it has come to my attention (thanks angel_girl322) that Big Bite do a vegan pizza with vegan cheese and topping, 12 inch for £7! Got one whilst drunk recently, was great!